A boy’s most special birthday 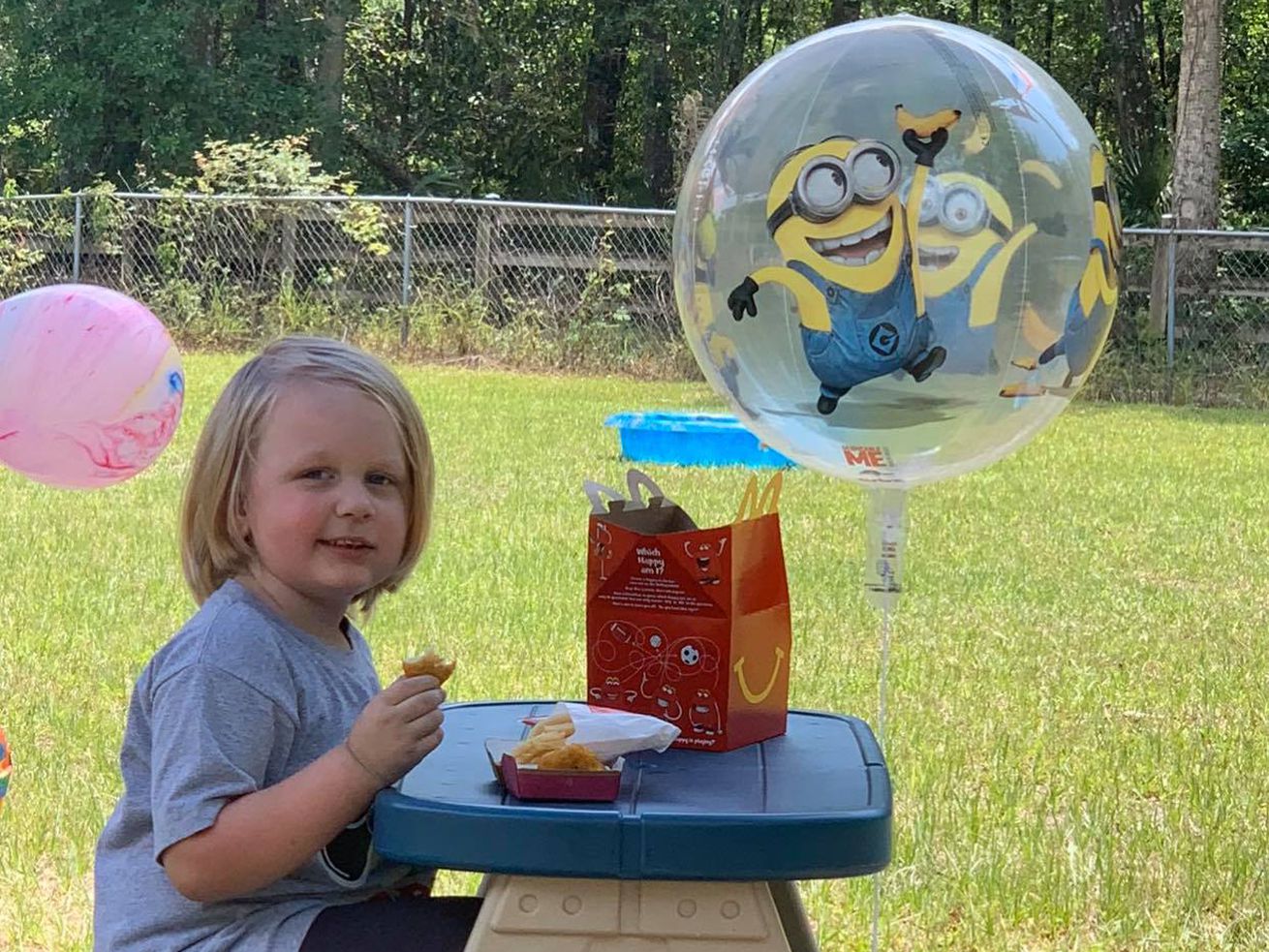 Aydan, 4, munches on a birthday lunch of a McDonald’s Happy Meal. Later on, neighbors would floodhis street with birthday wishes and balloons to celebrate a most unusual birthday. | Provided by Bethanne Blinder

With his party prevented by the virus outbreak, 4-year-old Aydan still celebrated in a memorable way.

Three balloons, tethered to a chain-link fence, wobble in the Florida heat. At nearly 90 degrees, with subtropical humidity, the air sweats. But 3-year-old Aydan, one day from his fourth birthday, hardly notices as his family arrives with a birthday treat.

A chicken nugget happy meal, to be exact, along with apple juice or, as Aydan calls it, “Hulk Juice,” because it makes him “super strong.” Aydan loves McDonalds, calls it his favorite food. He doesn’t know that this is just the first surprise.

Or so his family hopes.

They moved here last summer from upstate New York. Aydan loves it, his mom says, because New York didn’t offer him much. The playground wasn’t safe. There were no beaches, nothing to do outdoors. But here, living with his parents and grandparents, he follows his grandpa’s lead on outdoor adventures and playground expeditions.

The plan was to celebrate his birthday at Chuck E. Cheese. He’d watched videos of the token-fueled children’s casino on YouTube, though he’d never seen one in person before the move, and that’s where he wanted to turn 4.

Then the pandemic hit.

Florida shuttered nonessential businesses, though Aydan hardly noticed that. For a toddler with Asperger’s syndrome, a pandemic doesn’t translate to panic; it just means his favorite playground is closed, for reasons he doesn’t yet understand.

But his family scrambled to show that his birthday mattered. They invited over a handful of family members and played made-up games, like tying a balloon to someone’s ankle and having Aydan chase them down and pop it, or stocking their inflatable swimming pool with ducks, each one holding a clue in a scavenger hunt. Aydan’s mom even spray-painted a race track for him to drive his power wheel buggy around the property, around traffic cones and on to a finish line — like he does in his favorite video games.

Their biggest surprise, though, is what made them the most nervous. Two days before, they posted on a local Facebook page called Micanopy Matters, asking neighbors to stop by, sign a card, wish Aydan a happy birthday, and leave a balloon on the fence. “It would really make his day to see a fence full of balloons” they wrote.

It seems like a long shot, so they posted the message again the morning of his party. They also tied three balloons to the fence, just in case nobody showed up.

But at 10:30, Charlotte Mcelroy arrives. It’s a good sign; they don’t really know her. She stops by again in the early afternoon to sign the card, which the family has placed outside the fence along with hand sanitizer and gloves. More visitors show up all morning and into the afternoon, leaving stickers and gifts and signing their names.

Aydan, his long, wispy blonde hair covering his left eye, looks on. He hasn’t processed what’s happening. But by 1 p.m., a dozen balloons decorate the fence. Visitors walk up and drive by in a near-continuous parade, and the chorus of “Happy Birthday” finally registers. The boy grabs his chest, right above his heart, tears twinkling in his eyes.