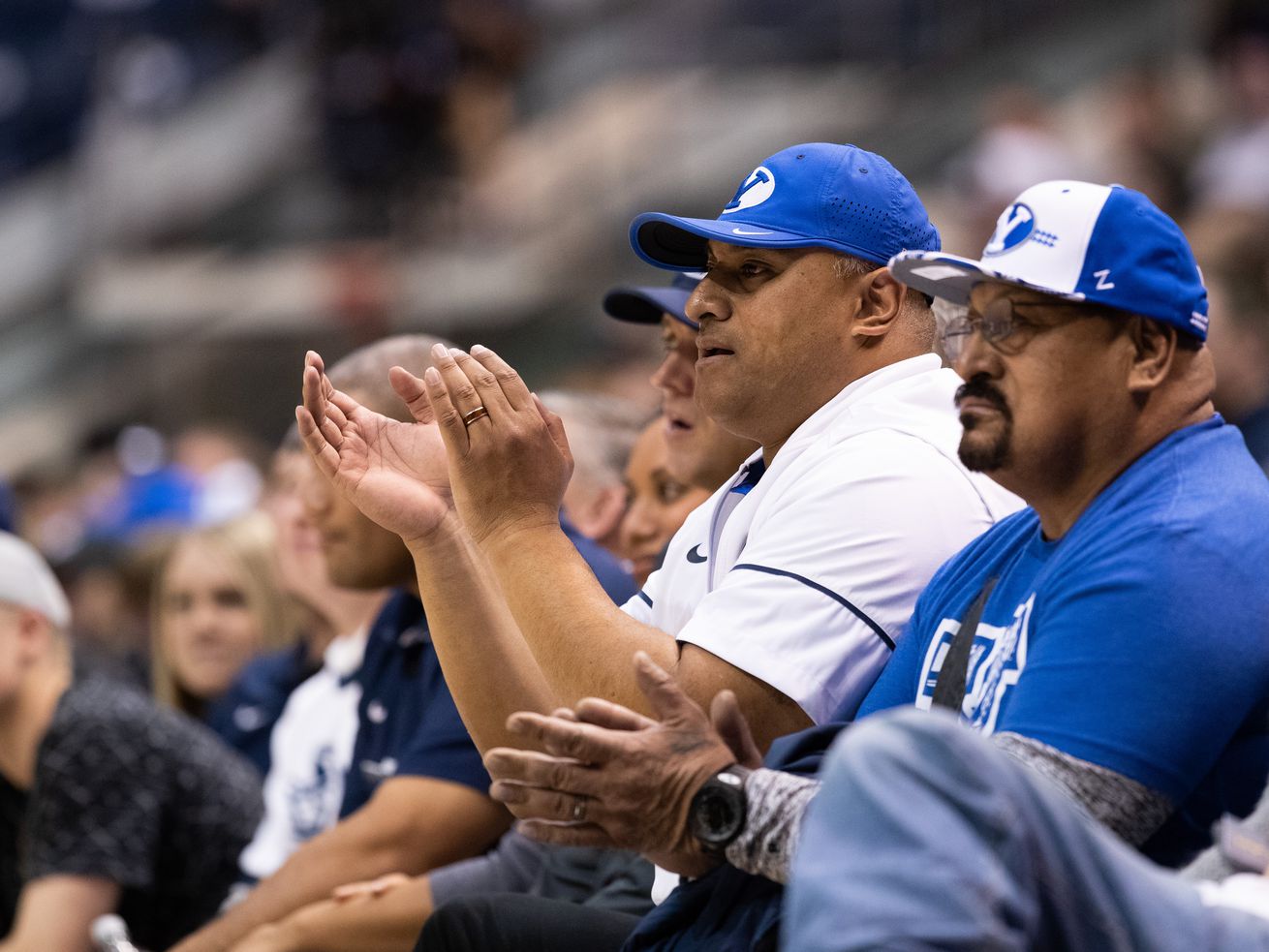 Tomasi “Tom” Sitake talks to his son, BYU’s head football coach since 2016, every day by telephone and visits him personally in Provo at least four times a week

Instead, “for me his gift is that we are always staying in touch and hanging out,” Kalani said. “That is what he expects from us. Trust me, he has plenty of ties. … He’s the best-dressed person I know. He has a full closet.”

And a full heart.

“A college degree is a Father’s Day gift to me every day,” Tom said.

The father and son have formed an unbreakable bond since the son was a toddler. They are as tight as a father and son can get. Rarely does a day go by that Tom doesn’t swing by Kalani’s office in Provo, or visit a football practice in Kalani’s four seasons coaching the Cougars.

“He definitely inspires me to be a better father. And that usually means spending time with your kids, and I try to do that as much as possible. He has pushed me to really love my kids. The way he is with my kids is how I hope to be with my grandchildren some day.” — BYU football coach Kalani Sitake

Often, Tom drops by after working a shift as director of vocational rehabilitation at the Utah State Hospital.

Ask anyone involved with BYU football. Tom is almost always around — even at games away from LaVell Edwards Stadium, at firesides and speaking engagements. He estimates he sees Kalani between four and seven times a week, and knows he texts his son or talks to him on the telephone at least once a day.

“I always swing by to not only show my support to him, but also to the coaches and the players,” Tom said. “I try to do the same thing with my other kids, too.”

The man would be the perennial winner of the Utah County Father of the Year Award, if there was one, Kalani said.

“He definitely inspires me to be a better father,” said Kalani, who has three children with his wife, Timberly. “And that usually means spending time with your kids, and I try to do that as much as possible. He has pushed me to really love my kids. The way he is with my kids is how I hope to be with my grandchildren some day.”

Kalani has three younger siblings: Toakase, Pamrose and T.J., who are close to him and his father. After his parents divorced when he was 6, he was mostly raised by his father and the family lived in Laie, Hawaii, before eventually moving to Provo.

The family moved to the St. Louis, Missouri, area when Kalani was a teenager, and he graduated from Kirkwood High, then played football for BYU after a mission for The Church of Jesus Christ of Latter-day Saints to Oakland, California.

“I have been involved in all my children’s lives from elementary school to junior high to high school to college, so it is nothing new for me to be involved in all my kids’ jobs and work,” said Tom, noting that he has taken part in their sports and activities, their scouting assignments, their church service — everything.

“I know he knows a lot about coaching and has done well, but I feel I need to be involved because of our relationship,” Tom said. “Relationships have a lot to do with what is good in life.”

This one is rock solid.

“He is probably the guy I speak to the most about advice on everything,” Kalani said. “Ever since I was little, I think I was one of those kids that asked tons of questions, and he was always the one who gave me legit, honest answers. I don’t think that has ever stopped.”

When Kalani coached at rival Utah for 10 years, Tom was a constant there as well. He rarely missed a Utah game, and coach Kyle Whittingham often saw to it that Tom had a seat on the charter flight to away games.

The father-son combo even works out together, and have ever since Kalani can remember.

“My dad trained me,” said Kalani, who was a highly recruited linebacker and fullback in high school before he committed to then-coach LaVell Edwards at BYU. “I remember going to BYU after training with my dad in high school and that transition to college workouts was easy for me as a freshman.”

Tom said one of Kalani’s greatest attributes is that he cares about everyone, from the star player to the video guys, trainers, even the media. Social distancing during the pandemic has been hard on Kalani, who loves to hug people, friends say.

After he committed to Edwards, he cared so much about the coaches who had been recruiting him that he called each one individually to let them know he wasn’t coming and thank them for recruiting him.

“He is not going to take advantage of people,” Tom said. “That is a quality that he has, and I’ve seen it in him from a very young age with his siblings and teammates. He always gives credit to other people when everything goes right. And if anything goes wrong, he takes the blame.”

The duo says they watch sporting events together — when there’s not a pandemic going on — and during the commercials they do push-ups, sit-ups, dumbbell curls or something physical.

“The way I look at it, there are two ways to do things that are considered work, like cleaning your garage,” Kalani said in 2017. “You could take the approach that you are going to work hard and kill it and be done in an hour. And that’s fine. Or you could put on some music and invite your family over and enjoy it and have fun. That’s how I like to do things.”

And always, always, with his father by his side.