How becoming a dad changed these 6 men 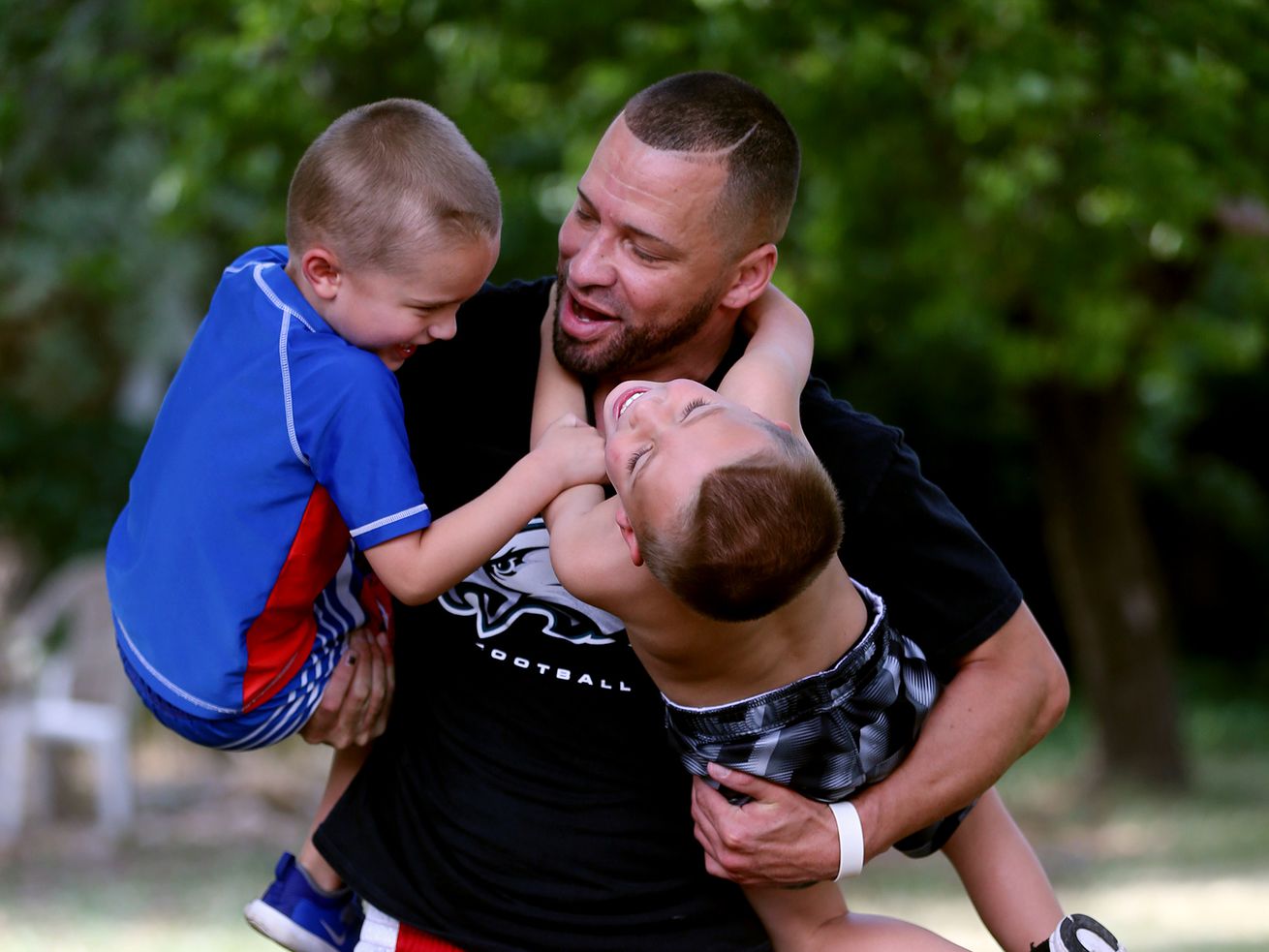 John Chapman wrestles with his boys, Easton and Braxton, as he tries to get them to settle down for a posed photo in their backyard in Holladay on Friday, June 5, 2020. | Scott G Winterton, Deseret News

Having a child can be transformative for men, giving meaning to Father’s Day that transcends a card or a gift

SALT LAKE CITY — From homemade cards to store-bought presents, dads across America will be celebrated on Sunday, Father’s Day. But for many men, the best gift they ever got from their children was the transformation of their own lives.

Like an asteroid knocked out of its orbit, men can be impacted by the birth of a child in “a defining developmental moment,” write former University of Utah professors Paul Florsheim and David Moore in their new book on fatherhood, “Lost and Found.”

Studying unwed fathers in Salt Lake City and Chicago, Florsheim and Moore found that troubled young men were sometimes radically transformed by fatherhood, holding jobs after chronic unemployment, kicking addictions to drugs or alcohol, or turning away from a criminal past.

“Redemptions of this sort often involve an awakening in which a sense of purpose is discovered, along with the internal strength to pursue that purpose,” Florsheim and Moore write.

But fatherhood can also transform men in simpler, quieter ways, as when the highlight of a doctor’s day becomes seeing his toddler’s first smile in the morning.

Here are six fathers in different circumstances, speaking candidly about how having children transformed their lives.

‘A huge wake-up call’ in Holladay

John Chapman, 39, grew up without the presence of a father, so when he found out he was going to be a dad, he was determined that wouldn’t happen to his son.

“It was a huge wake-up call for me,” said Chapman, a single father who has full custody of a 4-year-old and shared custody of a 5-year-old, both boys.

An athlete in high school and college, Chapman said his life was derailed by a diagnosis of Type 1 diabetes when he was 30, and the challenges of managing the disease. “I fell off the deep end,” he said. “It was a huge struggle for me, and I started drinking a lot, not really caring about my life or what was going on. I went through a dark, dark place.”

After his first son was born, however, he had to spend a year caring for the infant full time. “That’s when it all became real. Here I am, a first-time dad, waking up every hour to feed him.” It wasn’t just the new schedule that brought order to his life, but the knowledge that this child was totally dependent on him. “It wasn’t about me, anymore,” he said.

Because of COVID-19, Chapman is again a full-time, stay-at-home dad and loving it, though it’s temporary. To help pass the time while his sons aren’t in school, he recently bought a bunch of superhero costumes that his boys love to don while they play in the yard together.

“My health has gotten so much better,” he said, adding that if he hadn’t become a parent, “I honestly don’t think I’d be here. I’d stopped caring about everything.

“Because my dad wasn’t really in my life, I had always told myself, if I have the opportunity to have kids, I will be there for them.”

A new job and focus in New York City

Three months before their son was born, Lance Somerfeld and his wife realized that the solution to their child-care dilemma was for Somerfeld, now 47, to give up his job as a sixth grade teacher.

“The first couple of years, to us, was of paramount importance. There are a lot of quality day cares, but we didn’t want to give up that foundation to another loving caregiver. We wanted to take that responsibility on for us,” Somerfeld said.

When his wife’s maternity leave was over and she returned to work, Somerfeld tried to connect with other stay-at-home dads, but they were difficult to find. “There was a moms group everywhere, for every age child, in every neighborhood. But nothing for dads,” he said.

So with a friend, Somerfeld started his own. And what began as a small group of stay-at-home fathers connecting for outings in New York City has since grown into a network of both at-home and working dads. The City Dads Group now has 19,000 members in 41 cities, including Salt Lake City.

The son who started all of this is now 11; his sister is 5, but Somefeld is still not sure when, or if, he will return to teaching. Loving children, Somerfeld says, has “opened up a different type of lock I’ve always had on me.”

A dream fulfilled in Riverton

For Arthur Henry, 66, fatherhood was a dream that was beginning to seem out of reach.

He and his wife, Carla, had tried to have children for years, but had not been successful. Then they’d arranged for an adoption, which fell through when the mother changed her mind before the child was born. “That was pretty traumatic for me,” Henry said.

The couple’s second attempt at adoption was the charm, and Henry and his wife brought their daughter home when she was a day old. Diaper changing hadn’t been on Henry’s resume — he was an electronics technician — but he quickly got up to speed, and when his wife returned to work, the couple decided he would be the one to stay home with the baby while working from home.

Before Mariah, Henry said he and Carla had a good marriage and happy life for nine years. “But we needed somebody else, and she was it.”

Now retired, Henry is facing Father’s Day for the first time with an empty nest; Mariah is 21 and recently moved to a place of her own. “I’m really feeling it,” Henry said. But he isn’t worried about losing the special connection they have.

“On her first day at home, Mariah grabbed my finger and we made a pact, that I would never let her go and she’d do the same for me. She’s been a blessing to me,” he said.

A lesson in adulting in Sandy

Jeff Montgomery was 19 and a carefree college student when his girlfriend got pregnant. She was 17, a junior in high school. Her parents wanted her to go out of state to have the child and then put the baby up for adoption. Montgomery was having none of that.

“When I heard that, I said, ‘There’s no way I would ever be able to live with myself knowing that I had a child out there and no responsibility for that child,” said Montgomery, now 57. “So we thought, let’s try getting married. At that age, that was a scary thought.”

They were married in June 1982; their son was born in November. All three of them had growing up to do, Montgomery recalls.

“It was an arduous process, really. I was trying to go to school, work full time and be a parent,” he said. “We would get strange looks. People would glare at us, kids having kids. That was hard, but my son was the joy of my life at that point.”

The marriage didn’t last — “We knew going into the marriage that we probably wouldn’t be together forever, but I wanted to make the best out of the situation,” he said. Both went on to remarry and have other children, and Montgomery said he could never regret having his son, who is now 37.

“It made me grow up in a hurry and learn to be financially responsible. Being a parent at that age, you learn that there’s more in life than yourself and what’s 6 inches in front of you,” said Montgomery, who’s now a grandfather, too.

A new legacy in Texas

As a former Air Force pilot and a defensive lineman for the Dallas Cowboys, Chad Hennings thought he knew something about pain.

But then his son developed an autoimmune disease that wracked his small body with fever and rashes, and made him unable to walk at age 2 1/2. Suddenly, what seemed challenging before in Hennings’ life was insignificant in light of this new battle.

“Doctors had no idea what was going on. And for the first time in life, I had a problem where I couldn’t control the outcome, that I couldn’t fix with my work ethic,” Hennings said. “He just kept getting worse and worse.”

For a year, the family lived with chaos and uncertainty, during which Hennings found his priorities no longer revolved around athleticism and performance. “My life changed to where it wasn’t about me,” he said. “I would play a game and then fly my son to see a specialist on the West Coast, and fly back the next day,” he said.

Now a commercial real estate executive and board member for Promise Keepers, Hennings, 54, put Chase first during that trying time because he realized that “my ultimate legacy, that one that I pass on to this world, is my son,” he said. That legacy now includes a daughter, Brenna — born four years after Chase.

A new identity in Manhattan

Dr. Benjamin Salter, a cardiothoracic anesthesiologist in New York City, knew his life was transformed when his son, Oliver, was born 21 months ago.

“When he was born, that was one of those inflection points in your life that zigs. Or zags. It just changes things forever,” he said. “When that child is born, you transition from whatever you were to father.”

But it wasn’t until COVID-19 slammed New York that Salter, 39, realized just how profound those changes were.

As patients began to fill Mount Sinai Hospital, where Salter works, he and his wife decided that Katie and Oliver should temporarily live with her parents in the suburbs. What they thought would be two weeks turned into four, then six, and Salter found his life increasingly unsatisfying.

“When you’re in love with your family as much as we are, FaceTime at bedtime is not enough. Being at work all day, I didn’t want to come home at night, because they weren’t there. It got to a point where it was too much,” he said.

So Katie and Oliver returned home, taking precautions that so far have worked; no one in the family has gotten sick. And Salter, having discovered that the bachelor life he once enjoyed no longer appeals, was happy to return to a life in which his chief pleasures derive from a toddler. On the first night Oliver was back, “If my wife would have let me, I probably would have slept in his room,” he said.

“While we love to go out on a Saturday night, it’s not a priority. I’d rather be there for bath, and I go to bed excited to wake up and see him wide awake and smiling; that makes my day.”