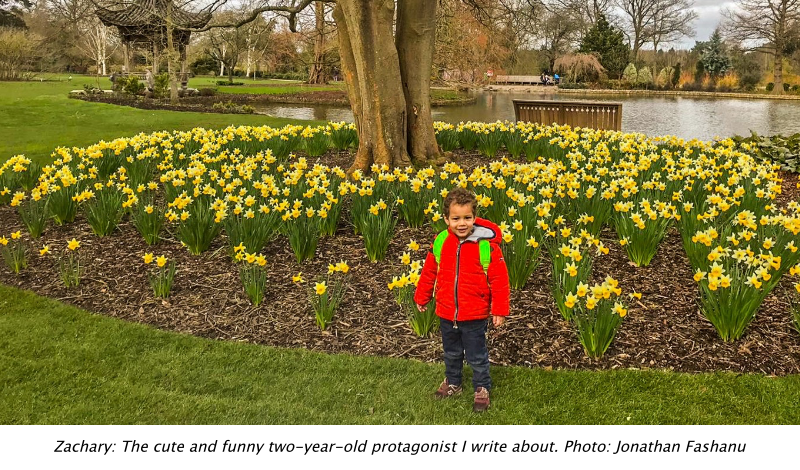 The sun was beaming in through the window when I got up. Perfect morning for a quick run, I thought as I got into my gear. I heard the little monster stirring in bed, so I slipped him a warm bottle of milk before he could thwart my plans. We don’t get the sun often in winter, and the run couldn’t have gone better.

I got back home to find breakfast ready. The stars must be in alignment; I smiled as I strutted in. My wife gave me the “Nice of you to join us, while I try to stuff coco pops into our two kids” look. We’ve become experts at saying things without the need to tell them. “Well you’ll get an hour of bliss when I take Zach for Rugby”, I raised my eyebrows in reply.

Ah, sport on a Sunday such a Father and Son thing to do. It’s our bonding time, Zach’s and mine. I think he looks forward to it as much as I do. It’s the only day of the week I can get him to put his shoes on without a showdown. I ponder on how this dynamic would change as Laila gets older as I sip my coffee. I would need a Father and Daughter thing to do soon. Knowing Laila, it would be wrestling. She’s got a knack for fighting her nappies off and beating up her toys.

He picks up the football as we start to head out. “Zach, you know we’re playing rugby today, let’s not make coach Peter mad.” Also, because I pay £38 a month for toddler training, I’m going to make every second of rugby time count. “Besides, we play football every time we go to the park.” He drops it. “Alright, Dada.” Wow listening already! “Can we take the red racing car?”

The red car is a crappy white polo with a small red line. I had to take the picture to show the ratio of white to red on this car. It is also the slowest car in the world. I bought it as a deterrent for my speeding tickets. It is a manual transmission, unlike the automatic family car we usually go out in. Hence the racing car atmosphere it creates for Zach. “Sure.” We always take it anyway.

Training is still a very much parent-involved activity. Most toddler events are; as instructions are not very well received. Especially for Zachary, who enjoys doing the opposite of any instructions given. That morning, the coach wanted to limit such input and told all the parents to wait by the side.

At his usual insistence on proving me wrong, Zach decided he was all up for instruction. He actually stood in line, ran to all the coloured cones assigned to him and scored his share of tries. The only time I had to step in was when Zach and a couple of other boys squared up to each other pretending to be dinosaurs. They stood in the middle of the field roaring at each other. Further evidence that they had descended from cavemen.

Actually, that is a lie, there was another time I had to step in. Zach and another boy had thought it was a good idea to take a bite out of some fallen leaves. They, unfortunately, had not enjoyed the experience. Both parents had to clear the leaf debris from their tongues. Apart from those minor incidents, our boy had done it. He had excelled at listening and coach told him how well he had done. I gave him a high five and told him I was proud of him.

Now I struggle with showing excitement and need to show it more when he does something positive. A trait learned from my dad when I was a kid. Men weren’t supposed to show emotions, and as boys, we were men-in-training. As a result, I never wanted to feel disappointed by not seeing my dad excited at my achievements. I’ve been working on it though hence the high fives, which I dish out on the rarest of occasions. Celeste is fantastic at it though.

His response caught me off guard, I expected him to go “Okay Dada,” or “I’ll do that next time Dada.” Instead, he hung his head down and said, “Sorry, Dada.” My heart melted. Was it my tone? Was it that I only used his full name when I was telling him off? Was it that he felt disappointed? That feeling of disappointment took me back to my childhood. Trying to win approval from my dad and get a pat on the back, only to be told to work harder next time.

I felt bad. I had always told myself I would celebrate even the smallest of victories with Zach. I had let the team down with this one. “No, I’m sorry, Zachy. Should we go get an ice-cream on the excellent listening you did?” “No, thank you, Daddy.” “Some Chocolate instead?” “No thanks.” “What would you like then?” I knew I was compensating at this point. I suppose I wanted to tell him that daddies can make mistakes too, and I was happy to make it up to him.

“Can I have an apple?” “Umm sure, if that is what you really want?” “Yea! Thanks, Dada!” “Errr cool, I’ll pick one up for you.” So I pulled over, picked one up and continued heading home. All I heard for the next five minutes was chomp, chomp, chomp like a baby goat. I left him to it, not wanting to ruin the vibe. “Dad, is this a tomato?” “A tomato”. No, I couldn’t have. I could usually tell the difference between an apple and a tomato. I stay away from the latter unless in a sauce or a salad. I looked confused as I did a double-take.

“I think it’s an apple Zachy, what does it taste like?” He burst out in triumphant laughter. This kid is crackers, he’s lost it. How am I going to explain to his mum that I’ve finally broken him? “Is it a banana?” He looked up at me, still in stitches. It finally hit me, he was attempting light-hearted banter with his dad. I guess this was his way of saying it’s all cool. “I’m pretty sure it’s an apple.” Zach cracked up again. The rest of the journey home, we spent in sheer amusement and laughter.

Kids are funny little things. They understand that making mistakes is part of growing up and never dwell on them for too long. You never see babies give up trying to walk after falling on their faces. (Laila just face-planted on a kitchen tile as I typed this sentence). Yes, there usually is a massive tantrum (and a bit of ice) but they are back on it right after. They are happy to forgive us when we make mistakes. If only we could remind ourselves that as parents it’s okay to make them.

This post was previously published on A Parent Is Born and is republished here with permission from the author.
—

If you believe in the work we are doing here at The Good Men Project and want to join our calls on a regular basis, please join us as a Premium Member, today.

Need more info? A complete list of benefits is here.

Talk to you soon.

The post It’s Okay to Make Mistakes as Long We Show Our Kids We Care appeared first on The Good Men Project.