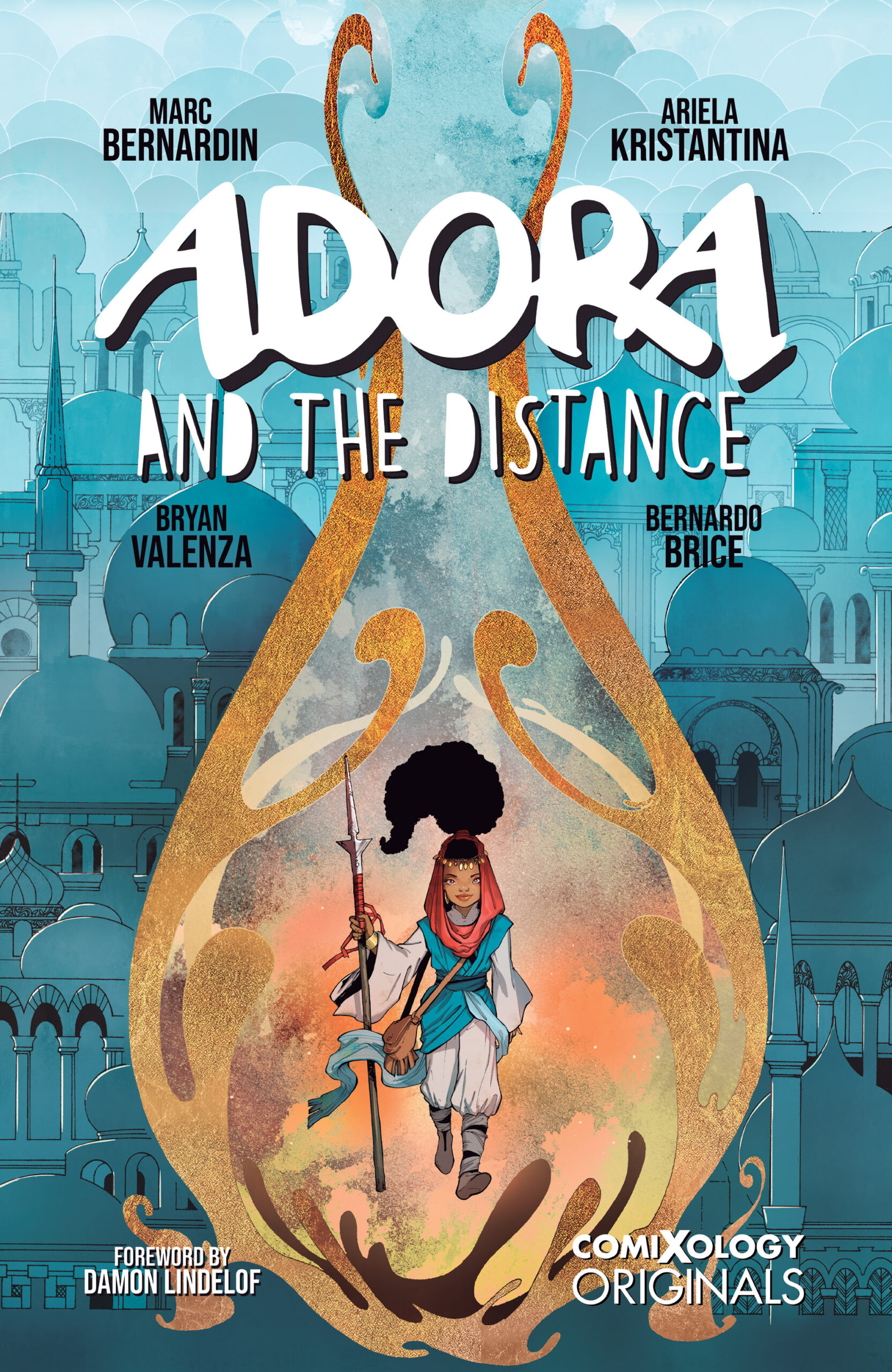 I’m just a guy who, with his spouse, trials-and-errors his way through parenthood. If you’re really interested in reading about how I’ve gotten diner-chef good at making grilled cheese sandwiches and French toast, given that those are staples of a diet that’s 10 foods deep…well, I don’t what to do with that.

I’m not the hero. Which got me to wondering…

Inspired by Bernardin’s daughter who was diagnosed with autism as a toddler, Adora and The Distance is a YA fantasy story about a brave young woman of color who lives in a fantastical world with underground pirates, giants, and ghosts who must confront a mysterious force called “The Distance” which threatens to destroy it all. Adora and The Distance will be available digitally on June 15, 2021, in time for Father’s Day, at no additional cost, for members of Amazon Prime, Kindle Unlimited, and comiXology Unlimited, and for purchase on the Amazon Kindle Store and comiXology. 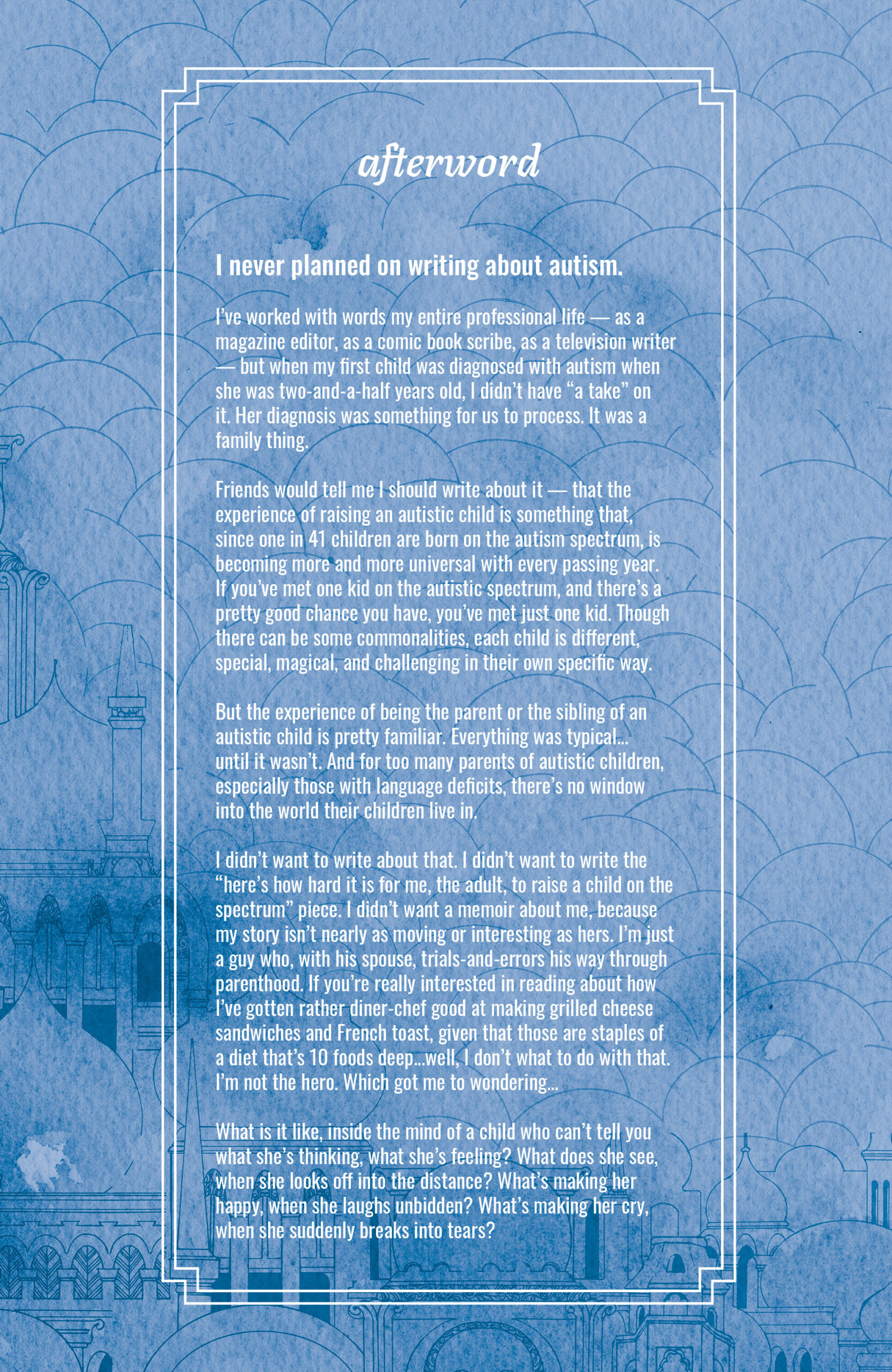 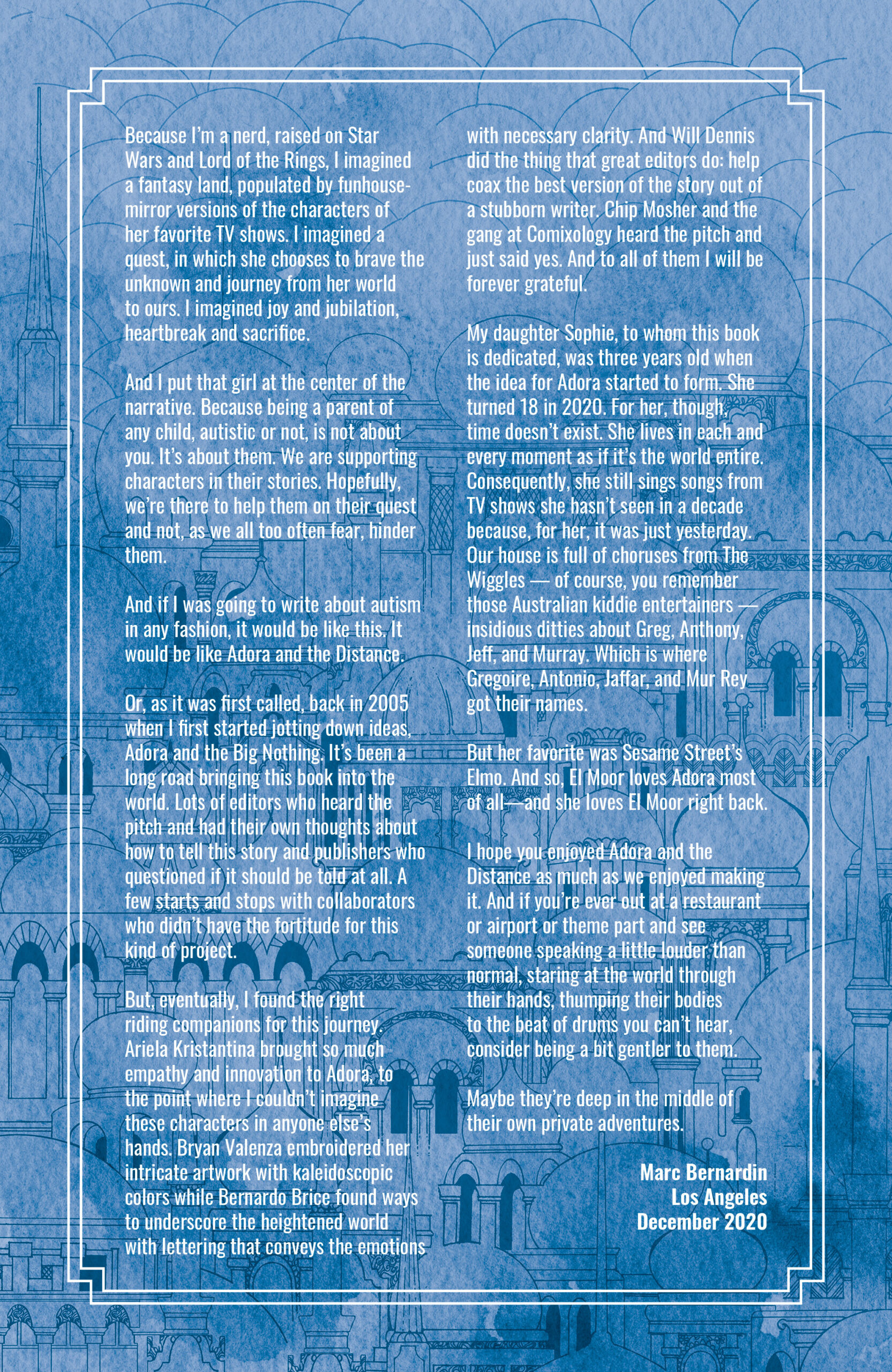 I never planned on writing about autism.

I’ve worked with words my entire professional life — as a magazine editor, as a comic book scribe, as a television writer — but when my first child was diagnosed with autism when she was two-and-a-half years old, I didn’t have “a take” on it. Her diagnosis was something for us to process. It was a family thing.

Friends would tell me I should write about it — that the experience of raising an autistic child is something that, since one in 41 children are born on the autism spectrum, is becoming more and more universal with every passing year. If you’ve met one kid on the autistic spectrum, and there’s a pretty good chance you have, you’ve met just one kid. Though there can be some commonalities, each child is different, special, magical, and challenging in their own specific way.

But the experience of being the parent or the sibling of an autistic child is pretty familiar. Everything was typical…until it wasn’t. And for too many parents of autistic children, especially those with language deficits, there’s no window into the world their children live in.

I didn’t want to write about that. I didn’t want to write the “here’s how hard it is for me, the adult, to raise a child on the spectrum” piece. I didn’t want a memoir about me, because my story isn’t nearly as moving or interesting as my daughter’s. I’m just a guy who, with his spouse, trials-and-errors his way through parenthood. If you’re really interested in reading about how I’ve gotten diner-chef good at making grilled cheese sandwiches and French toast, given that those are staples of a diet that’s 10 foods deep…well, I don’t what to do with that.

I’m not the hero. Which got me to wondering…

Because I’m a nerd, raised on Star Wars and Lord of the Rings, I imagined a fantasy land, populated by funhouse-mirror versions of the characters of her favorite TV shows. I imagined a quest, in which she chooses to brave the unknown and journey from her world to ours. I imagined joy and jubilation, heartbreak and sacrifice.

And I put that girl at the center of the narrative. Because being a parent of any child, autistic or not, is not about you. It’s about them. We are supporting characters in their stories. Hopefully, we’re there to help them on their quest and not, as we all too often fear, hinder them.

Or, as it was first called, back in 2005 when I first started jotting down ideas, Adora and the Big Nothing. It’s been a long road bringing this book into the world. Lots of editors who heard the pitch and had their own thoughts about how to tell this story and publishers who questioned if it should be told at all. A few starts and stops with collaborators who didn’t have the fortitude for this kind of project.

But, eventually, I found the right riding companions for the journey. Ariela Kristantina brought so much empathy and innovation to Adora that I can’t imagine these characters in anyone else’s hands. Bryan Valenza embroidered her intricate artwork with kaleidoscopic colors while Bernardo Brice found ways to underscore the heightened world with lettering that conveys the emotions with necessary clarity. And Will Dennis did the thing that great editors do: help coax the best version of the story out of a stubborn writer. Chip Mosher and the gang at Comixology heard the pitch and just said yes. And to all of them I will be forever grateful.

My daughter Sophie, to whom this book is dedicated, was three years old when the idea for Adora started to form. She turned 18 in 2020. For her, though, time doesn’t exist. She lives in each and every moment as if it’s the world entire. Consequently, she still sings songs from TV shows she hasn’t seen in a decade because, for her, it was just yesterday. Our house is full of choruses from The Wiggles — of course, you remember those primarily colored Australian kiddie entertainers, Greg, Anthony, Jeff, and Murray. Which is where Gregoire, Antonio, Jaffar, and Mur Rey got their names.

But her favorite was Sesame Street’s Elmo. And so, El Moor loves Adora most of all—and she loves El Moor right back.

I hope you enjoyed Adora and the Distance as much as we enjoyed making it. And if you’re ever out at a restaurant or airport or theme part and see someone speaking a little louder than normal, staring at the world through their hands, thumping their bodies to the beat of drums you can’t hear, consider being a bit gentler to them.

Maybe they’re deep in the middle of their own private adventures.

Adora and The Distance

Adora and The Distance is written by Bernardin (the award-winning television writer-producer and co-host of the popular podcast, “Fatman Beyond”, with Kevin Smith), illustrated by Ariela Kristantina (the artist of Insexts and Mata Hari and the upcoming Chain, written by Scott Snyder), colored by Bryan Valenza, lettered by Bernardo Brice, and edited by legendary comics editor Will Dennis.

Ahead of release, Adora and The Distance is already gathering accolades:

Adora and the Distance begins as a fantasy, all fun and brilliance, like a Game of Thrones for teenage girls, and then transmutes into something deeper and more moving, a reflection of an interior life that solves all the riddles it has propounded in a way that is both satisfying and heartbreaking. I’m so glad it exists. — Neil Gaiman, writer The Sandman, Coraline, American Gods

A letter from a parent to a child with love so overflowing that it’s visible on every page. —Kelly Sue DeConnick, writer Captain Marvel, Bitch Planet

Adora and The Distance is the first YA graphic novel for both Bernardin and Kristantina. It’s a deeply personal story, full of dazzling designs, gorgeous imagery, whimsical storytelling, and hope.

Part of the comiXology Originals line of exclusive digital content,  Adora and The Distance will be available upon release, at no additional cost, for members of Amazon Prime, Kindle Unlimited, and comiXology Unlimited, and for purchase on the Amazon Kindle Store and comiXology. Prime Reading offers all Amazon Prime members a rotating selection of over a thousand top Kindle books, magazines, short works, comic books, children’s books, and more – all at no additional cost.

For more updates on comiXology Originals, check out http://comixologyoriginals.com.

I’ll be reviewing  Adora and The Distance  in an upcoming All Things Geek, but in my humble opinion, this is a no brainer for any parent or caregiver to share with their families. 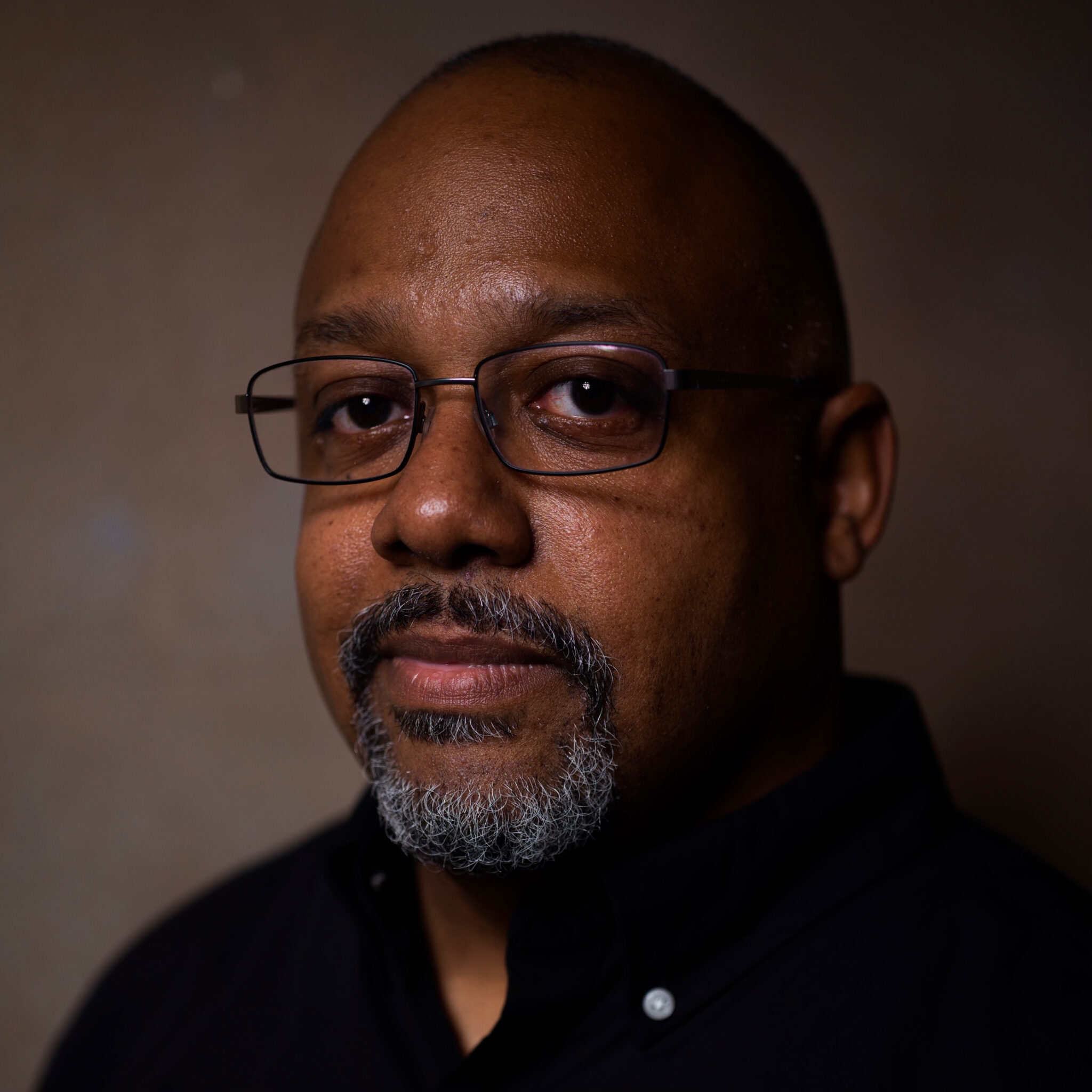 Marc Bernardin is a WGA Award-winning television writer-producer who has worked on Star Trek: Picard, the Amazon Victorian fantasy show Carnival Row. Previously, he was a co-producer on the USA Network spy drama Treadstone, a staff writer on the first season of Castle Rock, Critical Role: The Legend of Vox Machina, Masters of the Universe: Revelations,  the Stephen King and J.J. Abrams original series for Hulu, and a staff writer on Syfy’s superheroic television series Alphas. He’s also currently running a Kickstarter for an independent film: Splinter: A Short Thriller

In an earlier life, he was an entertainment journalist: he was the Film Editor for the Los Angeles Times, overseeing the paper’s movie coverage and coordinating the efforts of a dozen staffers. He was also the Deputy Editor of Playboy.com, a senior editor for The Hollywood Reporter, a senior editor for Entertainment Weekly, managing editor of Starlog magazine, and a consulting editor for Fangoria magazine. As a freelance writer, he has contributed to Wired, GQ, Empire, Details, Vulture.com, and Syfy.com.

In other words, he’s a great, big, shiny professional nerd. 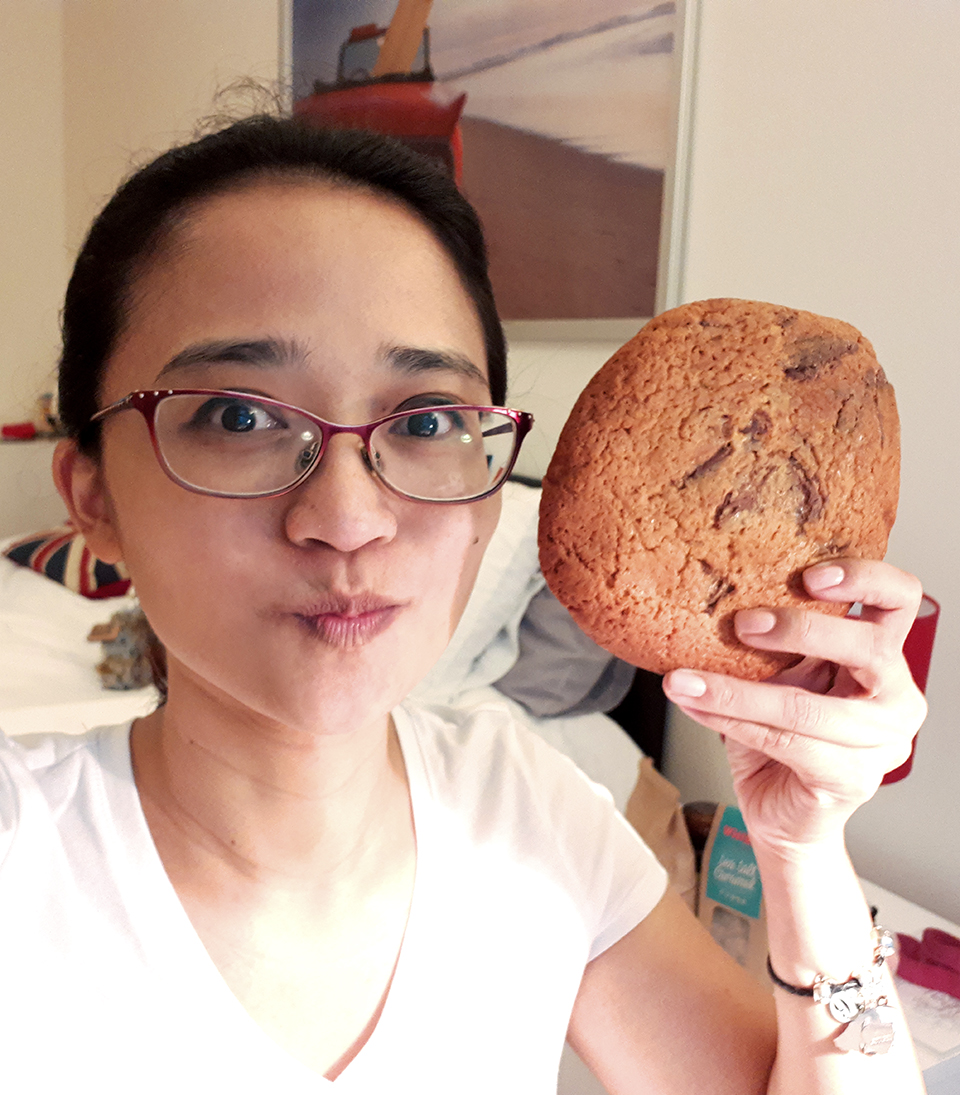 Ariela Kristantina is an artist from Jakarta, Indonesia. Since her debut in 2014, she’s best known for her work on InSeXts, Mata Hari, Deep State, and The Logan Legacy. She has contributed covers and illustrations to a range of companies including Image, DC Comics, Top Cow, Vault and more. In 2021, Ariela co-created Chain with Scott Snyder. Adora and the Distance is Kristantina’s first YA graphic novel.

If you believe in the work we are doing here at The Good Men Project and want a deeper connection with our community, please join us as a Premium Member today.

Premium Members get to view The Good Men Project with NO ADS. Need more info? A complete list of benefits is here.