Never Turn Your Back On a Toddler 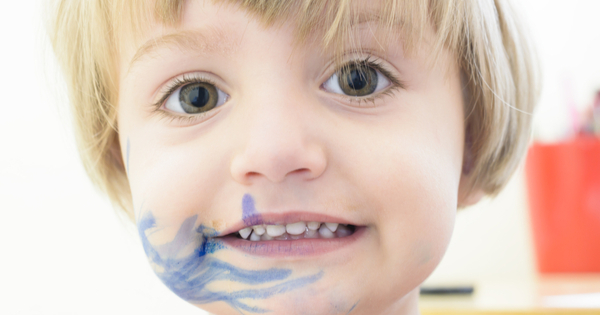 I’ve done messed up and I know it.  I’m better than that.  I’m not some sort of a rookie; a noob that doesn’t understand what can happen when you don’t pay attention to your toddler.

I was talking to my sister on the phone.  It was a call that required all my attention.  My toddler and I were having a great day.  A day filled with the park and coloring.

I’m better than that!

“I have to let you go, sis.  My son has decided to color himself.”

His hands and much of his wrists were covered in black marker.  He decided sometime over the course of my conversation with my sister that he was done coloring in his special coloring book.  Coloring hands are way more fun. So that’s what he did.  I’m sure he was laughing, but I couldn’t hear him with my earbuds in.

And he had to choose black marker because that makes it way more fun and way more difficult to get off.  He has to go to preschool tomorrow, and I know exactly what is going to happen.  I’ll give him a bath in rubbing alcohol trying to get the marks off his hands and wrists.  But I won’t get it all because I pick up the marker pack he was coloring with and nowhere on the package does it say washable.  Another rookie mistake.

I’ve been in the parenting game for a long time.  Over nine years of caring for children, and I’m still making these mistakes.

“What happened, buddy?” I asked him.

Yes, son, you colored.  Now you have to wear gloves to school tomorrow, and I have to tell the teacher it’s because we are afraid of germs.  Great, you are Howard Hughes now.  Have fun with that.

He then pointed to the table showing me his little black smudged handprints.  They are also on his chair, his clothes, and probably some on my computer which I left near him.  Suddenly my lazy afternoon has been filled up.  The rest of our day’s schedule is full thanks to a toddler and the parenting cliche “I only turned my back for a second.”

The post Never Turn Your Back On a Toddler appeared first on The Good Men Project.