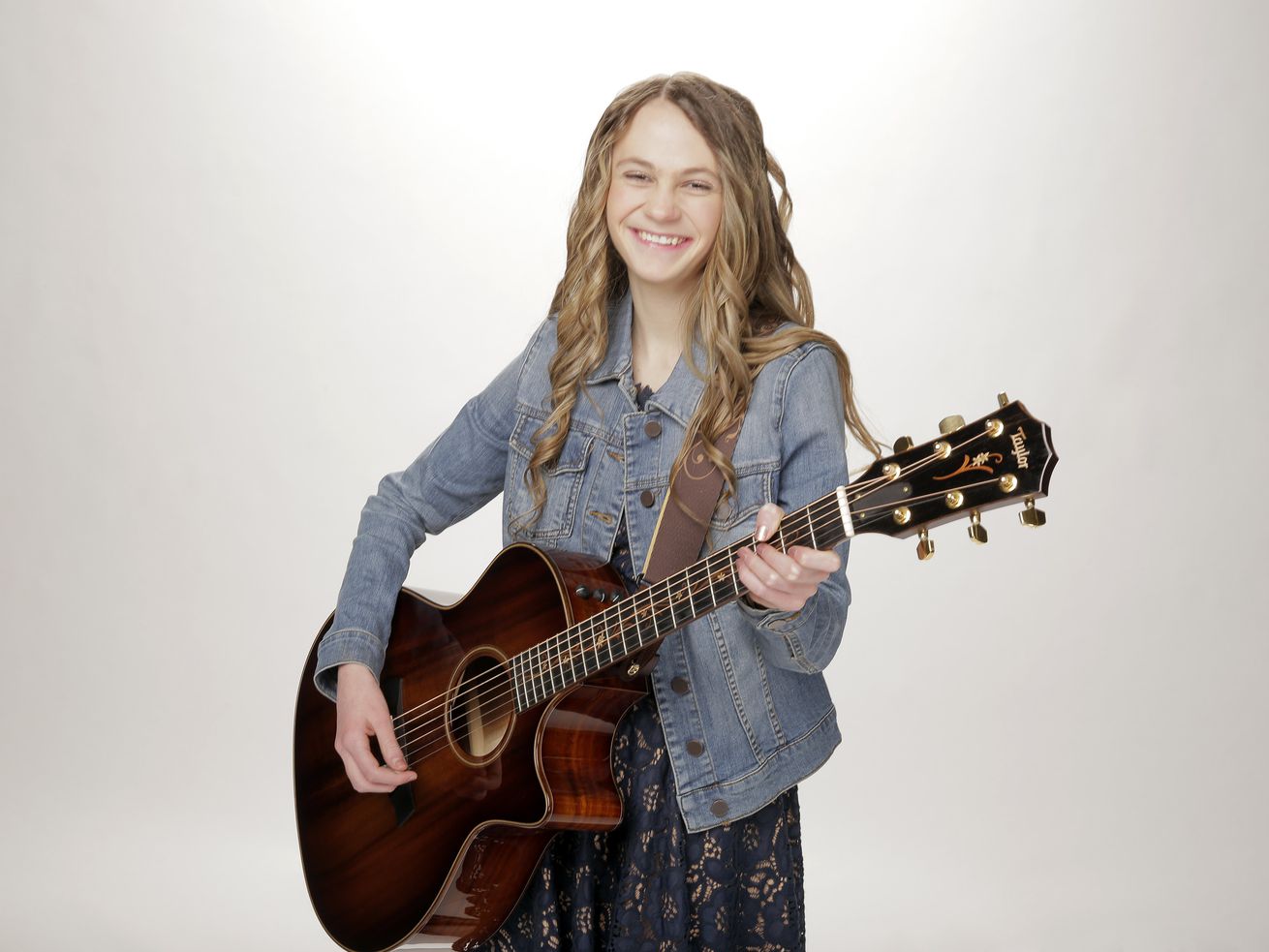 ‘My little sister told me that she wanted to see me on the biggest stage in the world before it’s too late and her vision’s gone,’ Kenadi said during her audition. ‘I’ve worked really hard to get here.’

For the 15-year-old country singer, it was the biggest stage she’d ever been on. Before “AGT,” she’d sung the national anthem at Utah Jazz and Salt Lake Bees games, Utah State University sporting events and the Days of 47 Rodeo.

But now, she was standing before judges Simon Cowell, Howie Mandel, Sofia Vergara and guest judge Eric Stonestreet, who stepped in for Heidi Klum because she was under the weather. Although there wasn’t a live audience at the time due to the coronavirus pandemic, 8.3 million people watched the episode unfold on national TV Tuesday night.

The eighth-grader from Logan, Utah, was one of 14 contestants who appeared on the episode. Before diving into song, Kenadi introduced herself to the celebrity judges and told them a small part of her family’s story.

Kenadi told the judges she’s been singing since she was a toddler.

“She would sing what words she could pick out (on the radio) then mix the rest with baby gibberish,” Kenadi’s mom, Brandi Dodds, told Cache Valley Daily in a 2019 article. “She could sing the tune without missing a note.”

Kenadi saw Shania Twain in concert when she was 9 years old, and knew from that moment that’s what she wanted to do, according to Cache Valley Daily. Because both of her parents are visually impaired and don’t drive, Kenadi relied on extended family, neighbors and public transportation to get to voice lessons.

“My family has an eye disease called Retinitis pigmentosa. I’m the only one in my family right now who doesn’t have it,” the young singer said with emotion. “My little sister told me that she wanted to see me on the biggest stage in the world before it’s too late and her vision’s gone. I’ve worked really hard to get here, and it’s been crazy.”

For her audition, Kenadi chose to sing her original song, “One Way Ticket to Tennessee.”

“It’s about all the support my parents have given me for chasing my dreams to be a country singer,” she said.

As Kenadi strummed her guitar, her 9-year-old sister stood backstage with a big smile on her face, and Cowell said: “I’ve got a good feeling about you.”

With a powerful voice, Kenadi began to sing: “Daddy always tells me to follow your dreams/ He says I can go far if I don’t care what people think/And if I want to be a star the key is working hard/Yeah, that is how you become your daddy’s country sweetheart.”

All four judges gave her a standing ovation after the performance.

“You kind of transform from who you are right now when you’re talking to us to when you start playing,” Mandel added. “This is just the beginning for you. I promise you, your future is already set in stone from this moment.”

Vergara said she loved Kenadi’s country look and style, and admired the fact that the young singer is already writing her own songs. Cowell called her “authentic,” and said he was surprised her family was from Utah.

“Your voice sounds as if you were from Nashville when you sing,” he said. “I love artists, particularly people your age who know what kind of lane they want to go down. … You know where you want to go, and I think we can help you get there.”

And with that, all four judges gave Kenadi a “yes,” sending her on to the next round of the competition. Backstage, host Terry Crews approached the singer and asked her why she was so emotional.

“I just feel so grateful,” Kenadi said. “I’m just glad that I did it, you know?”