My husband was off work for a 12 day stretch beginning December 23.   We had decided to use this time to work on redoing the flooring in our basement.  You may (or may not) recall, we had a flood in August of 2020 that required all the carpeting to be ripped out, and we lost much of the furniture that was in there as well.   We'd just hadn't gotten around to it, mostly because we just don't use that side of the basement much since we quit having our school room down there.

Back in November, I realized how crowded Olivia's poor bedroom was, and had an epiphany that we could redo the floors and she could move downstairs to have more room.  It does tend to be a lot cooler down there all year round, so she slept on the floor a couple of times to make sure she wouldn't mind.  She actually sleeps better in the coolness, so there's that.

December 22 - we moved all of the sewing/crafting/scrapbooking supplies from this side of the basement to the storage side, where the furnace and hot water heater are.  The room didn't seem to have "THAT" much in it when we started moving things over, but we soon filled up the unfinished side of the basement.   I left a little path to the deep freezer, the washer/dryer and left a safe gap around the furnace and hot water heater.

December 23 - The tiles that are on the basement floor are asbestos, so we chose to encapsulate them instead of having to pay a company to come in and "properly remove" them.  There are a few tiles cracked and missing.  Tom and Olivia spent the day filling those missing areas in with floor leveler and cleaning the floor.  As seen in the photos, I had to leave a few tables up until I finished packing/delivering holiday sweets. 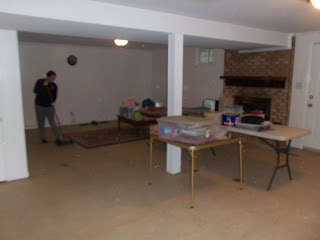 December 24-25 I'd told everyone that there would be no working on the floor, mostly because I didn't want anyone getting stressed and causing havoc for the holidays.  This is true in part, but it was also because Olivia had bought Tom and oscillating tool for Christmas, and we didn't want to risk him going out to buy one when he got to a place where he needed it.

Here are photos of the before, from several different angles.  You can see the areas that were missing tile, or had broken tile (the black is the missing area). 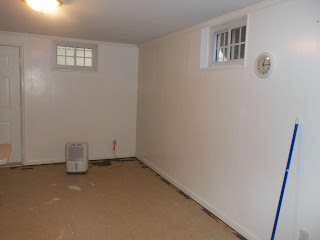 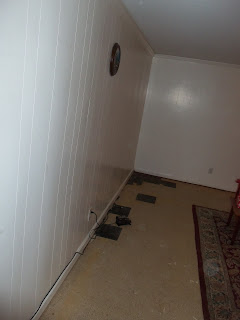 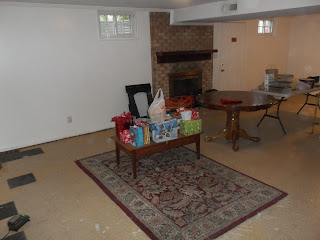 December 26 the flooring began in earnest.  This was a learning curve, since Tom had never worked with flooring.  The original plan was Olivia would help him, but with her work schedule and having to work the horses that were at the barn, she wasn't here for much.  Lindsey and I were the helpers.

This first photo was the beginning, and the second photo was where the day ended.  I'll admit, I was not amused with the lack of progress.  I am a results driven, get it done type of person.  Tom stopped working at 2pm on the first day of installation, and that just annoyed me to no end. 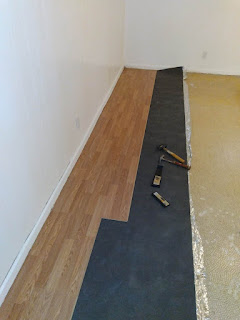 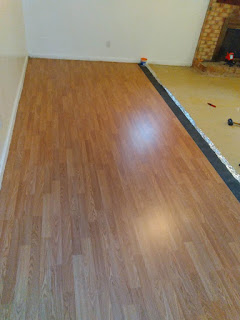 Part of the issue was that Tom's wood working equipment is all in our outside shed. When he works with it, he moves it out onto the back patio.  This meant every time he had to cut a piece he'd have to go up the basement steps, through the house and out to the back yard.  Let's just say he put a lot of mileage on those steps during this project.
December 27 we started working at about 8:30 and got considerably more completed.  Today's biggest hang up in progress was having to cut the pieces around the fireplace corners, the closet door and the door jam. 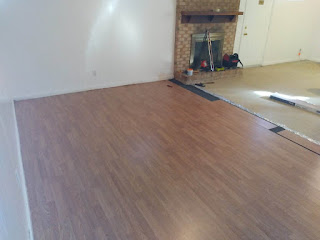 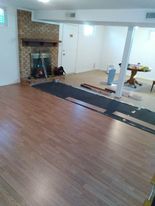 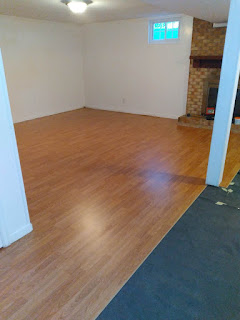 December 28 - For the most part, the flooring was straight with no cutting in.  There was an area around the door way into the unfinished side of the basement that took a bit of time to get it fit properly.  Then the last row of flooring had to be cut to fit a strip about 3.5 inches wide. 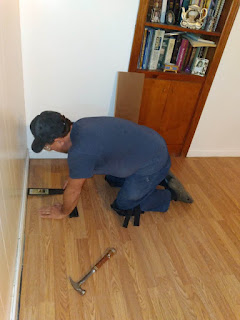 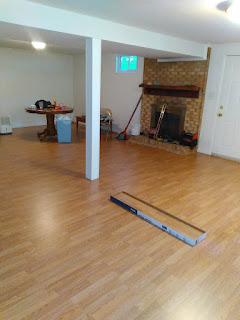 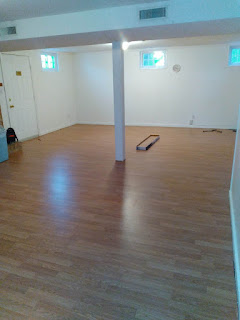 December 29 - Tom had to go pick up the trim, transition strips and nails for the nail gun to finish out the edges of the room.  He ran to the store and picked up the needed supplies first thing in the morning, then we headed out to have our final Christmas get together of the year, with my BFF and her husband.
December 30 - The trim was installed in the main room, and the closet flooring went in.
December 31 - Honestly, it's a blur.  I don't think we really did anything on the basement.  We had folks over in the evening for snacks, games and fellowship, so I spent my day making food and cleaning the house.   No photos...sigh.
January 1 - Tom got the closet trim installed and we assembled Olivia's new rolling clothes rack and shoe rack.  She moved all of her closet items in between shifts at work.

January 2 - We spent the day moving Olivia's furniture into her new suite.  I realized that Lindsey is a little stronger than I'd given her credit for, as she helped me moved some pretty heavy items.   Olivia was able to get most of her things put away between shifts and at the end of the work day.

Here's a tour of the new "suite".   You'll notice her horse motif throughout the room, I guess you'd say it has a southwestern flavor.  You'll have to overlook her boots, they are apparently fashionable and decorative.  First up is the stairway from the upstairs, complete with twinkle lights on the handrail. 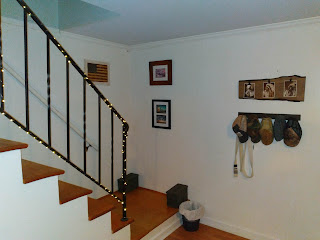 As soon as you come down the stairs, the bedroom portion of the room is directly in front of you.  Notice her t-shirt quilt on her bed.  I saved all the shirts from camps, ballet performances and sports teams from the time she was little and had the quilt made as her graduation present. 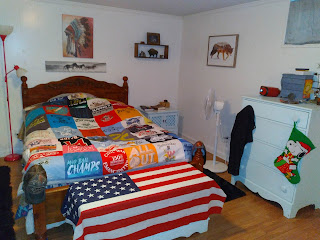 To the left, directly by the stairway is her other dresser, and the close is directly behind the wall, under the steps. 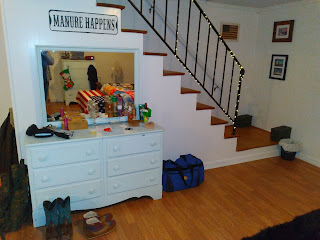 Looking out across the room, the next portion is her "sitting room", complete with a working fireplace. 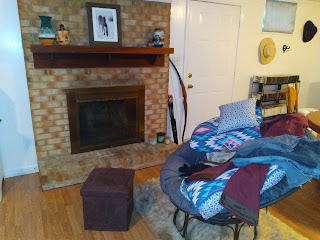 The back part of the room has a doorway that exits to the outside (beside the fireplace), and then her TV area and dining table and library/office run along the back wall. 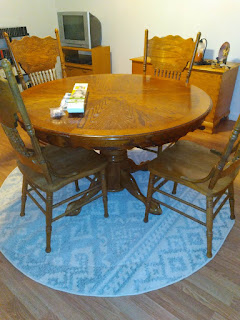 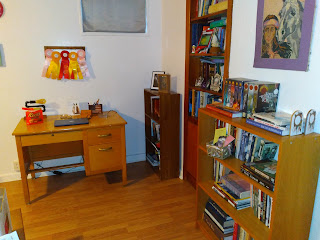 This was a much longer process than I'd envisioned, but I'm very pleased with how it turned out.  In case you're wondering, Olivia doesn't spend anymore time in her new room than she did the old room.  She's rarely home during the day, and mostly hangs out up here with us like always.

I'll show you what we did with her old room in a later post.
Back to News
Use left/right arrows to navigate the slideshow or swipe left/right if using a mobile device